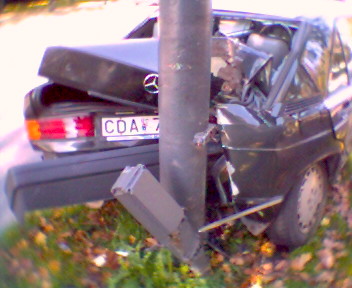 Broward deputies said that a 32-year-old Pembroke Pines man has died after smashing into a tree. Law enforcement officials said that Brendon Bachelor’s vehicle rolled over after initially hitting a median after crashing.

The vehicle mishap happened at 11100 Stirling Road in Cooper City around 4 AM on Saturday authorities revealed.

Sheriff’s deputies also said Bachelor was heading westbound on Stirling Road in a 2013 Hyundai Sonata and traveling at an unsafe rate of speed when he approached SW 110 Avenue.

Related: Wrong Way Crash on US 1 Leads to Death

The victim’s vehicle hit the elevated concrete median on the driver’s side. The car then veered wildly across the median and into eastbound lanes. The driver then attempted to regain control of the car, but over-corrected and caused the Hyundai to spin clockwise.

The vehicle hit the median a second time, which caused it to roll end-over-end. It plowed through a nearby grass median then smashed into a tree before coming to a rest.

The Broward Sheriff Fire Rescue team was called and got to the scene of the accident shortly after it took place. But unfortunately, Bachelor was pronounced dead at the scene.

While tragic, area investigators are hoping to figure out the complete picture and cause of the accident.

There are steps you can take to help you take control of the situation if you’re involved in a car accident:

Carry a set of orange cones, warning triangles or emergency flares in your trunk to help alert traffic.

Keep a pen and a card with any relevant medical information for you and your family in your vehicle.

Check for injuries; call an ambulance if in doubt.

Move cars to a safe area and out of traffic if the accident is minor.

Turn on your hazard lights. Use cones or flares for safety.

Related: Man Crashes into College after Killing 1 and Injuring 3

And one of the most important things to have available to you is the most reliable legal representation available.  If you or someone you know is involved in a car accident. Contact the Miami Car Accident Lawyers today.